Today, Blank Rome LLP and co-counsel argued before the New York State Court of Appeals on behalf of a non-biological lesbian mother, Brooke Barone, who is seeking shared parenting time and financial responsibility for a child she and her former same-sex partner, Elizabeth Cleland, planned for and raised together. The couple planned to marry but separated before the marriage equality law passed.

“Today, we aim to correct a terrible injustice. Our client, Brooke, must be equally recognized under law as a legal guardian to her son in the same manner as his biological mother,” said Ms. Canby. “This appeal was brought by the attorney appointed for the child based on his steadfast belief that the child longs for a reunion with his mother, Brooke. He argues, and we join him, that the failure to reunite this child with Brooke, based upon a 1991 judicial ruling – not a statute – that defines parenthood in an overly restrictive, outmoded, and discriminatory fashion, is against the child’s best interest and will do him substantial harm.”

Together with Lambda Legal and the LGBT Bar Association of Greater New York, Blank Rome represents Ms. Barone in her effort to continue to parent the six-year-old son she and Ms. Cleland planned to have together. The couple met in 2006, made a home together and became engaged in hopes that they would marry as soon as it became legal for them to do so in their home state of New York. Though not legally allowed to marry, the couple wanted to start their family immediately. They agreed that Ms. Cleland would carry the child, and she became pregnant in 2008 using an anonymous donor.

When their son was born, Ms. Barone was in the delivery room and even cut the newborn’s umbilical cord. They used Ms. Barone’s last name on birth certificate. Birth announcements were placed in the local newspaper listing both parties as the parents of the child. And, the women were held out as the parents of the child at his baptism. From the start, Ms. Barone fed their son, changed him, rocked him, bathed him, and took care of all the responsibilities a mother has to a baby. To his doctor, his day care, the pastor who baptized him, Ms. Barone is one of his mothers. When the couple’s relationship ended in 2010, Ms. Barone continued to parent their son and provided for him financially for the following three years.

In 2013, Ms. Cleland abruptly cut off contact between Ms. Barone and their son, requiring Ms. Barone to file for custody and visitation. The family court determined its hands were tied based on the high court’s decisions in 1991 in Alison D. and in a subsequent parenting case in 2010, Debra H. v. Janice R. The court dismissed Ms. Barone’s petition. The appellate court affirmed the lower court decision. After the attorney for the child asked the Court of Appeals to hear the case, New York’s high court accepted review.

Today, Blank Rome joined in arguing that the prevailing New York legal precedents do not account for the myriad ways that people make families, including same-sex couples, and that to consider non-biological parents “legal strangers” to the children they have cared for since birth is not in the best interest of these children. New York’s passage of the Marriage Equality Act and the U.S. Supreme Court’s 2015 marriage ruling in Obergefell v. Hodges call for greater respect for the families formed by same-sex couples and their recognition as full-fledged parents of their children.

In addition to Ms. Canby and Ms. Krauss-Browne of Blank Rome, who represent Ms. Barone on a pro bono basis, the legal team includes Susan Sommer of Lambda Legal and Brett Figlewski of the LGBT Bar Association of Greater New York. The child is represented by R. Thomas Rankin of Goodell & Rankin and Eric I. Wrubel, Linda Genero Sklaren and Alex R. Goldberg of Warshaw Burstein, LLP, who, along with Ms. Barone, also seek reversal of the decisions of the lower courts. 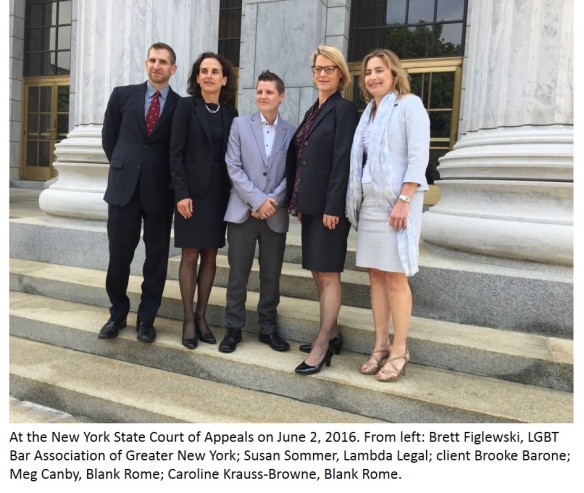